Siting, Form & Function
The siting of Three Chimney House is derived from the specificities of the land. It sits at the edge of the woods, roughly in a north-south orientation but rotating each of the house’s main functions into separate wings that frame picturesque natural views from each room.

The Main Hall—which contains the kitchen, dining room and living room—looks and opens up to wide, unobstructed views of the Shenandoah Mountains. The wood-clad Residential Wing is attached to the south side of the Main Hall via a hallway to create a threshold for entering the more private spaces of the house. Branching off the Main Hall to the north are an art studio and guest house.

Design Principles
We wanted to create a house that is pure and primitive in form, defined by chimneys, walls and roofs. Derived from the specificities of the local context, the design principles for the house aim to be timeless, durable, self-evident. The end results required a close reading of local building traditions.

Materials & Construction
Materials were selected for their long history of use in the area, longevity and ability to patina over time. The hope was that the construction success of the house would be measured against the nearby colonial forbearers rather than the modern houses under construction today.

Chimneys
Derived from the great chimneys of Stratford Hall, not far from where both clients grew up in Virginia. The three great chimneys mark the house on the site. At 30 feet in height, they are visible from almost every vista of the 45-acre site, serving as a point of orientation when the clients are walking the grounds with their energetic Great Pyrenees Mountain Dog.

Walls
Serving as a counterpoint to the chimneys, 12-foot tall site walls define the progression of movement through the house. They intentionally conceal and reveal the panoramic mountain views while registering the sloping natural landscape against the house. Mies van der Rohe’s early 1920s brick country house serves as an inspiration for how the natural landscape can be made clearer by the built construction, while not being tamed. The particular bricks are standard size and lime coated prior to firing in the kiln. Mortar joints are rough and flush to the face, emphasizing the mass of the surface instead of the individual brick units. The wood walls of the Residential Wing are inspired by the black cedar post fencing around the property as well as being a traditional finish for barns and house farms.

Roofs
Inspired by Thomas Jefferson’s Monticello nearby, natural copper roofs cover the three pitched volumes of the house. Formed with 18” wide sheets of copper, the top and bottom 4 feet of each standing seam has been beaten down by hammer to create a flat edge, giving a clean, sharp definition to the roof edge. The copper will patina over time eventually ending in verdigris approximately 50 years from now and marking the passage of time. 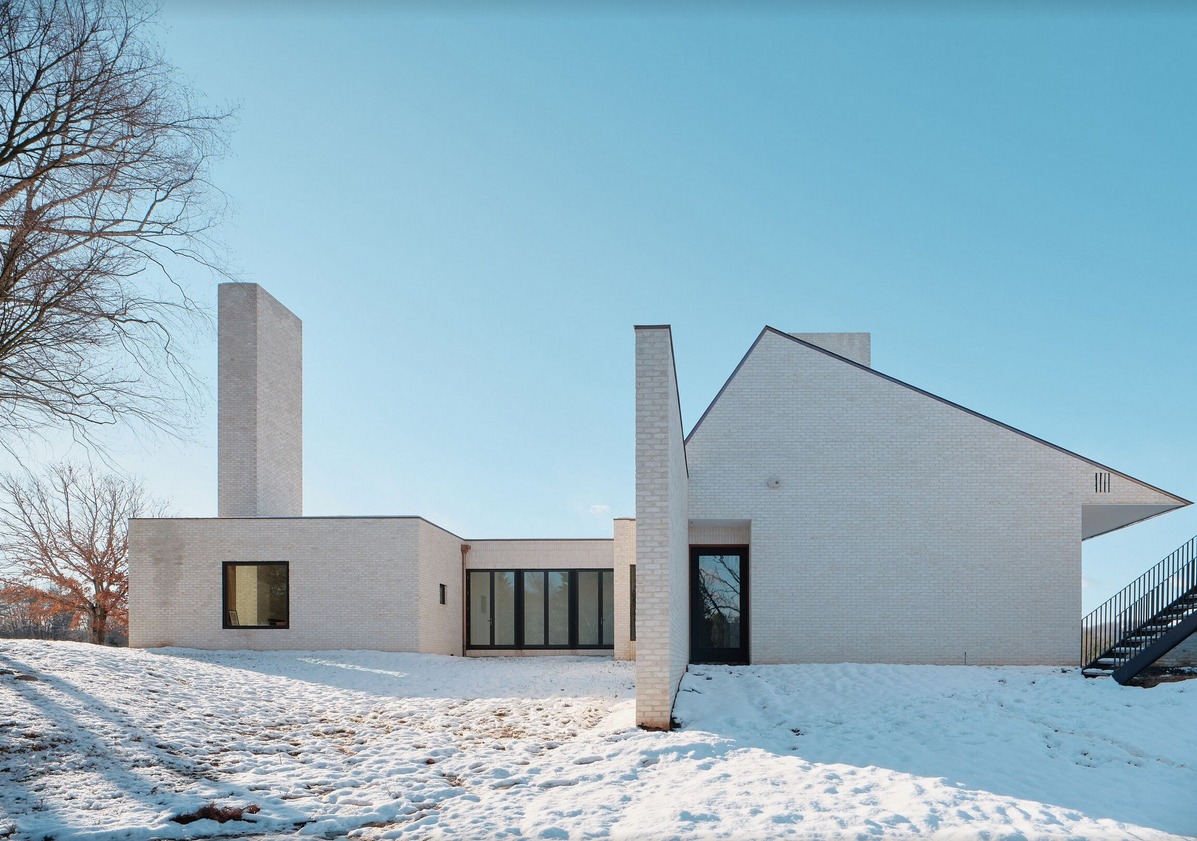 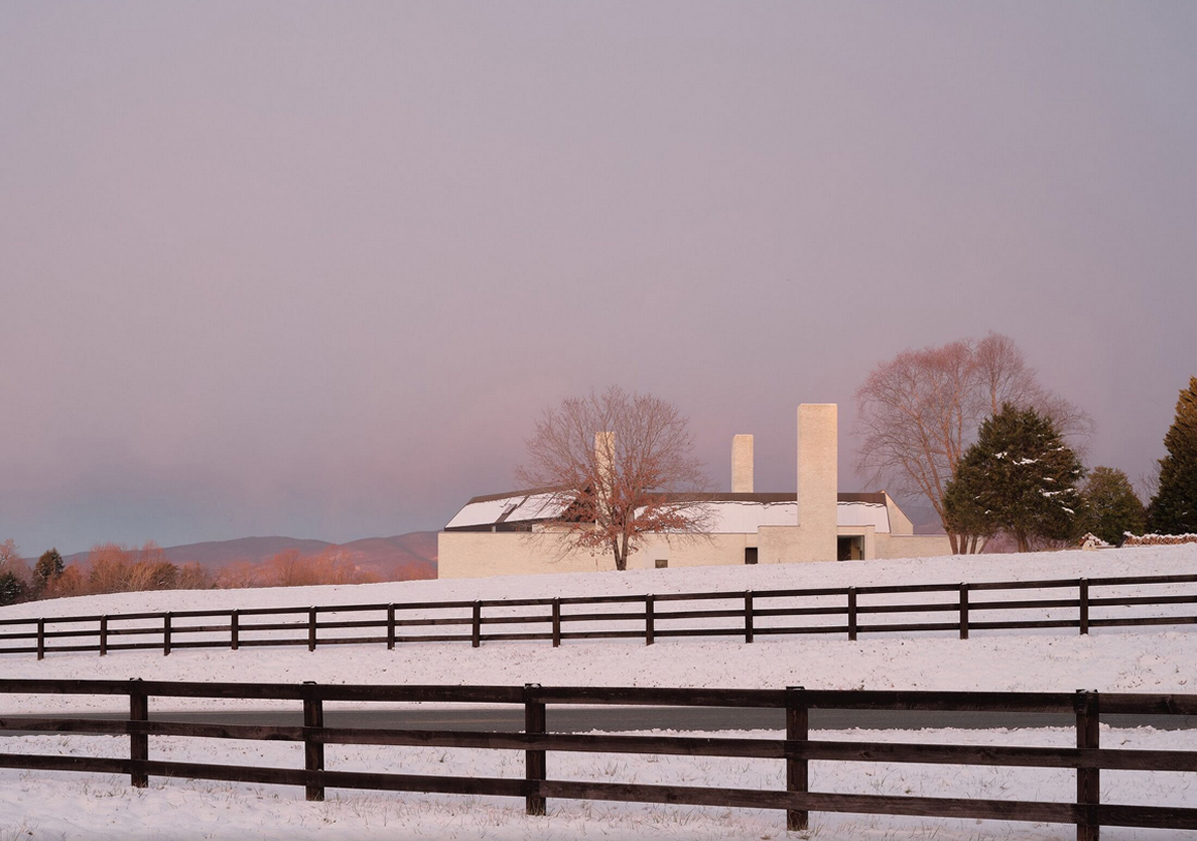 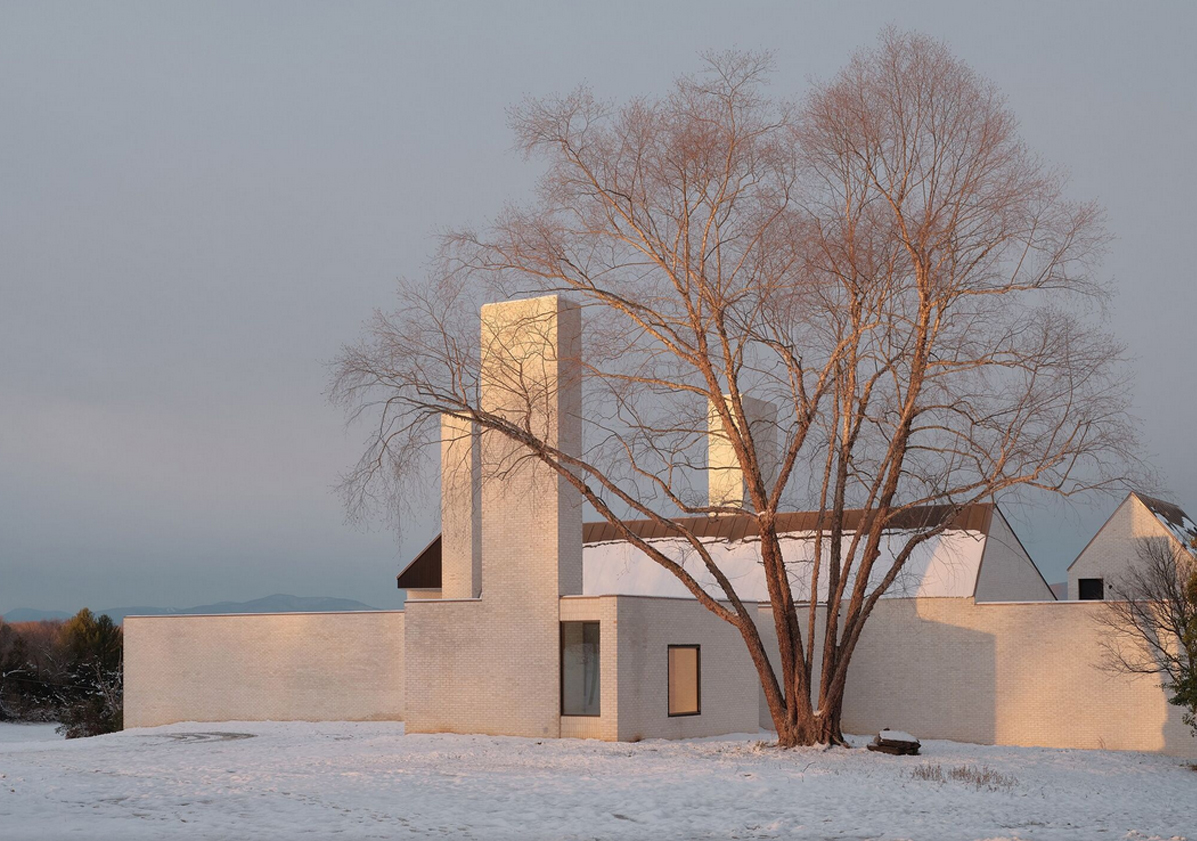 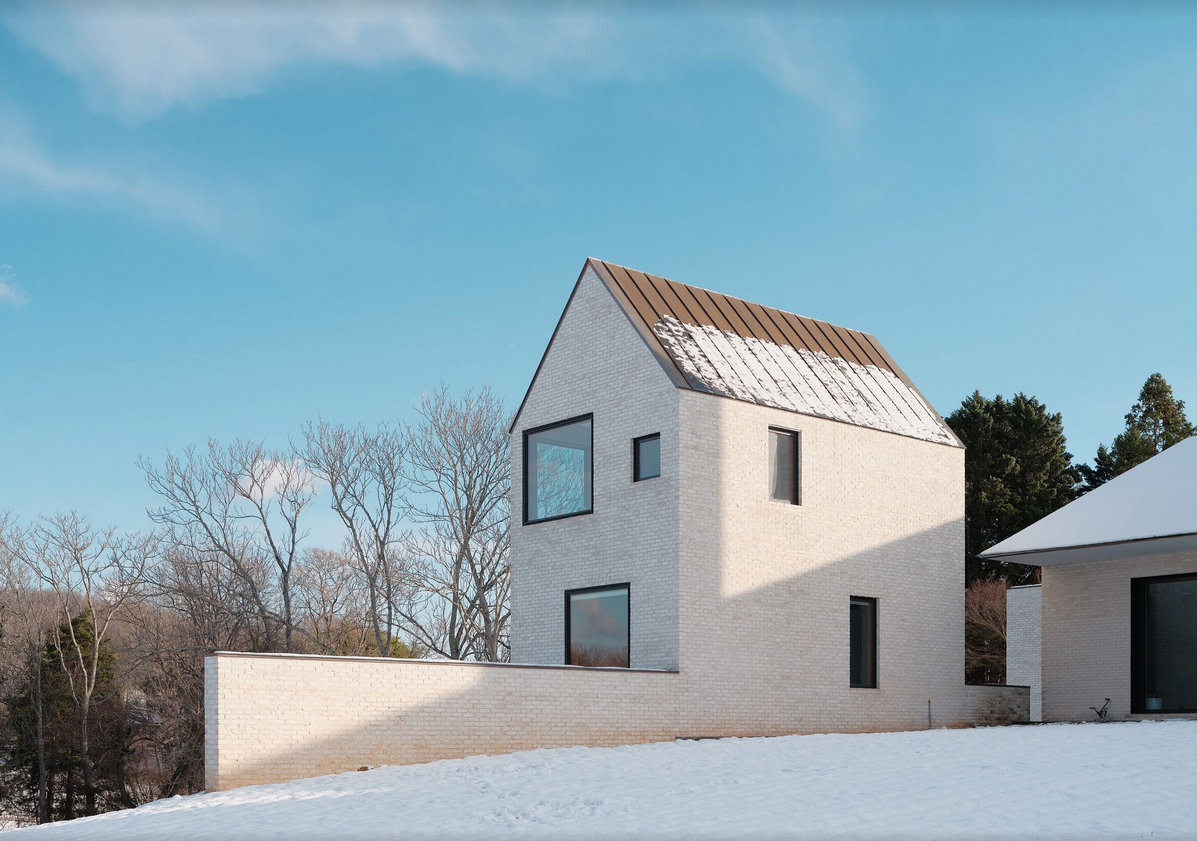 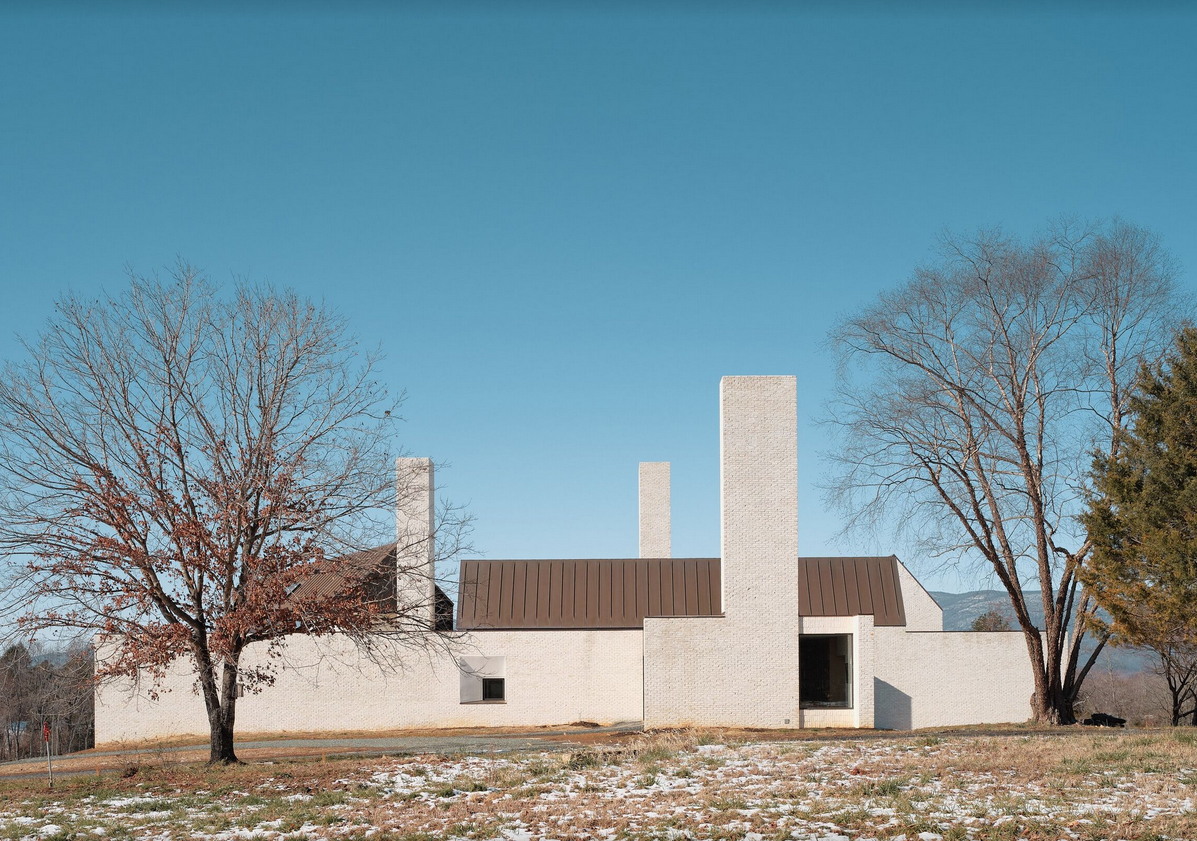 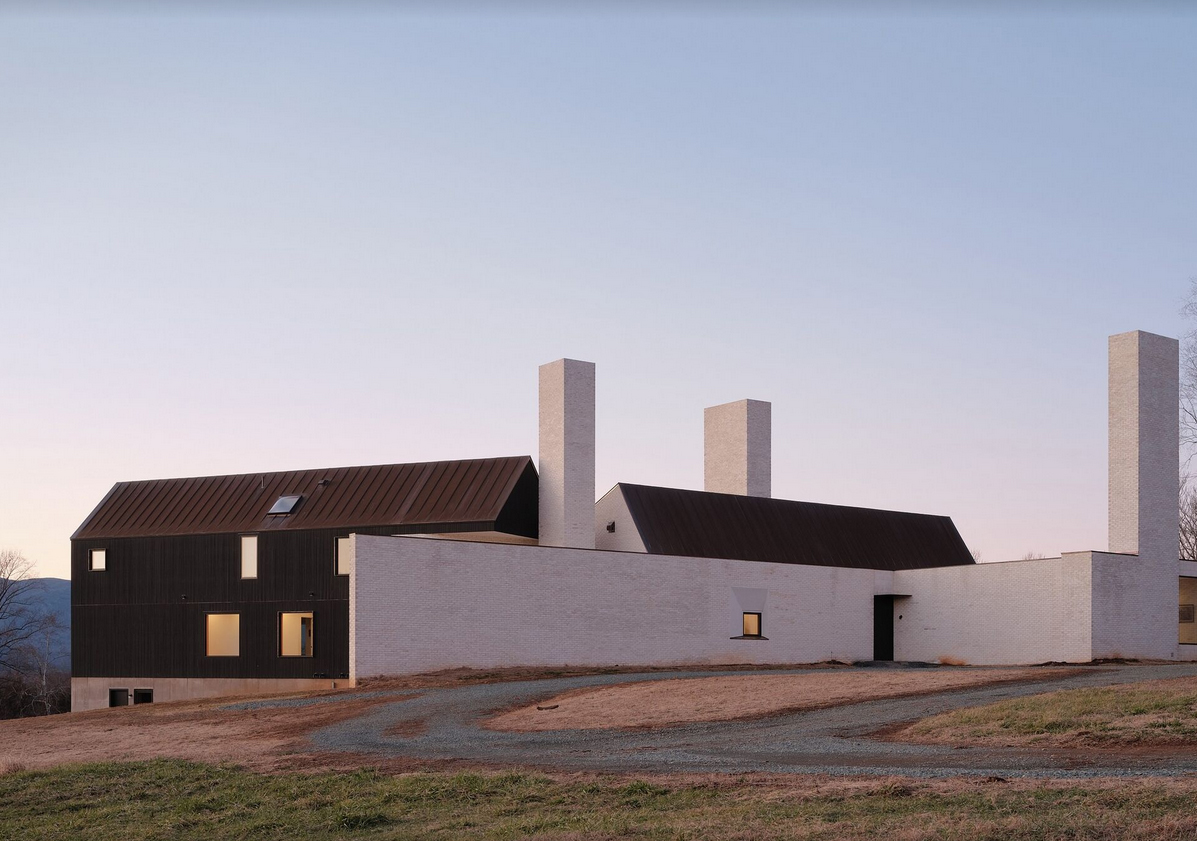 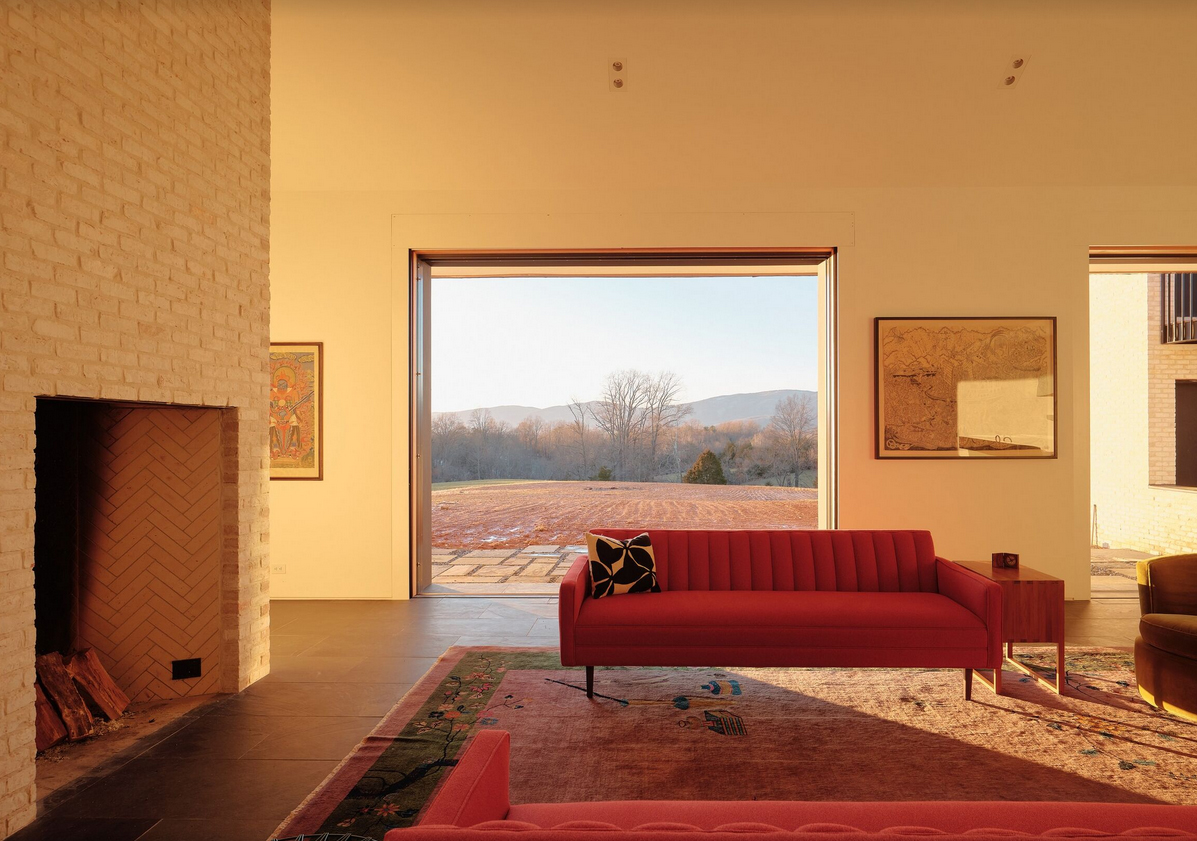