The Woodman’s Treehouse is a luxurious two-storey suite arranged between and beneath the canopy of aged oaks. Far from being a woodland folly it is the sleepover den every grown-up dreamed of as a child; a self-contained tree-top world of tricks and toys, part castle, part hovel, part lair. The treehouse is determinedly architectural, eschewing archetypal ‘Dr Suess’ aesthetic kitsch in favour of controlled composition and material exploration. The timber building draws on diverse architectural and cultural references combining with theatrical effects to create a visually rich and playful construction in the picturesque tradition. The building is situated in a Dorset woodland campus offering green workworking courses and was constructed by a self-build team of highly skilled green wood furniture makers, woodworkers and traditional craftsmen to an exceptionally high standard.

The plan is arranged around a central cylinder secreted within a rectilinear outer casing, paying modest homage to Palladio’s Villa Rotunda. Subordinate forms are ‘plugged-in’ to the faces of the octagonal central drum just as formal porticos adorn the facades of the classical villa. These sub spaces house lobby, bed, bath, and kitchen on the compass points around a central living space, each pragmatically scaled and distinctively clad. A rusticated top sits on the rotunda roof – inverting the tradition of a rusticated base, in the absence of any base to rusticate. The rooftop sauna box, clad in larch slab wood with elongated water spouts and slit windows gives the unmistakeable impression of a defensive position, a treetop fort keeping guard over the treehouse and the pier that connects it back to terra firma.

The central octagon is clad in alternating diagonal stripes of douglas fir and cedar, changing direction at each vertical seam to create a chevron pattern that strongly accentuates the primary geometry. Three ‘box rooms’, clad in cleft sweet chestnut log stacks, oak laths and hand cleft oak shingles respectively, surround the drum and create a painterly composition of forms and finishes. A fourth ‘box’ containing a kitchen is contained wholly within the drum and does not penetrate the facade.

The treehouse is entered across a stressed ribbon bridge to the lobby with its stacked log walls contained in heavy oak framing. A scorched oak door, with heavy marine porthole and submarine locking mechanism lets into a small scale lobby, providing a metaphorical decompression sequence for city guests shedding real world concerns and entering a fantasy realm. Internal walls are clad exactly to match the exterior surfaces, giving the illusion of a thick, single material construction.

An internal door accesses the surprise circular core, transporting guests into an imagined world of castle keeps, walls of death and Martello towers. The plan geometry leaves deep void spaces between the inner lining and outer walls which when penetrated by window and door openings gives an illusion of thickness that does nothing to dispel the suggestion of castle solidity despite the reality of lightweight construction. ‘Minecraft’ style torch lights lining the circle insist on the reliability of the illusion.

No hint of the rotunda form is evident from outside but within every surface is employed to reinforce its geometry from segmental ceiling to radially cut oak floor and vertically clad timber walls, gathered around a rotating wood-burning stove at the centre of the plan. The bed and bath spaces are set into ‘proscenium’ openings in the rotunda wall which create a striking scenographic effect with views into and from the rotunda perceived as if they were stage sets.

A large copper bath is set into a glass backed space with a massive oak trunk rising behind it. The walls and ceiling are raked and sloped to create a funnel around the glass wall, and stratified with an accelerating pitch to create an illusion of depth and scale in the manner of Borromini’s perspective gallery at Pallazo Spada.

Retiring to the bed space guests gaze upwards to the colour illuminated tree canopy through a deep tapering shaft with a frameless glazed aperture; a Turrell moment of illumination in a dark wood. And so to bed for dreams of childhood adventure, but not before escaping down the treehouse’s own playpark slide for a twilight stroll where the mere mortals dwell.

The treehouse was collaboratively designed by Guy Mallinson & Keith Brownlie of Brownlie Ernst and Marks. 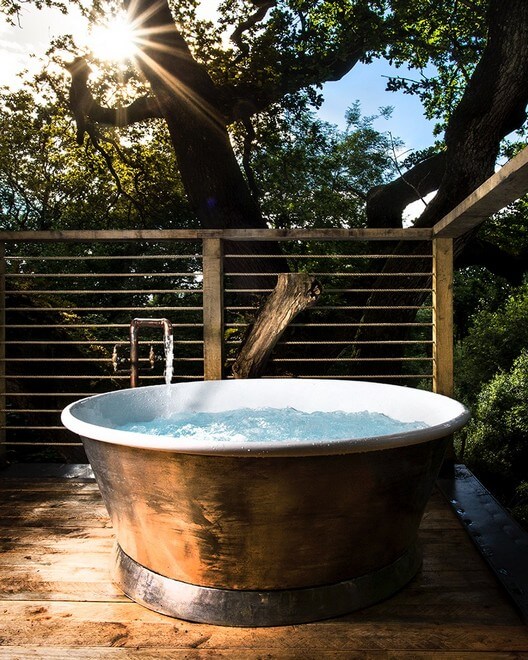 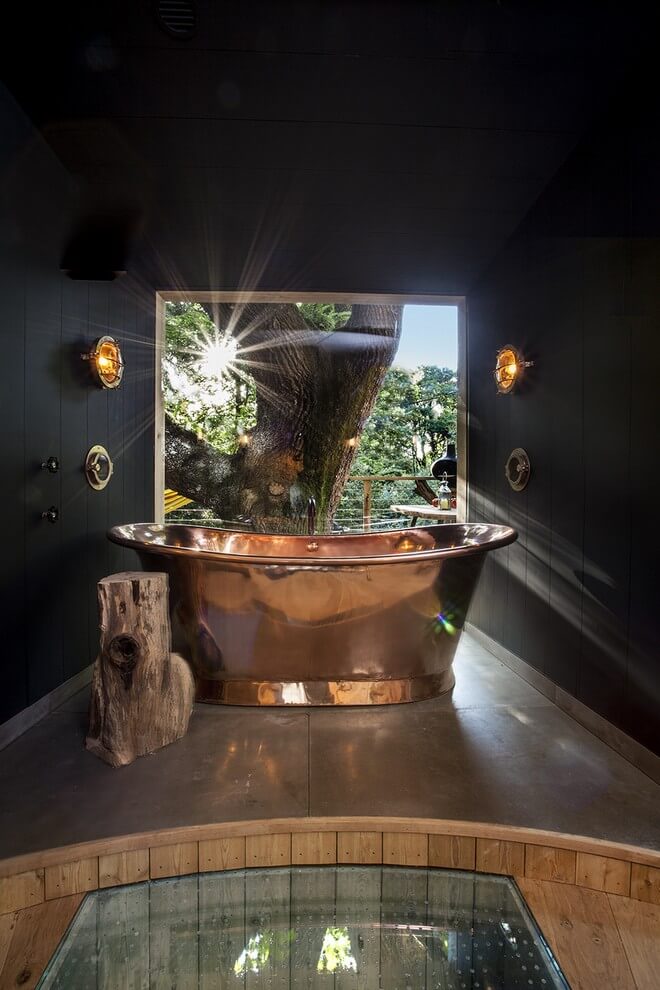 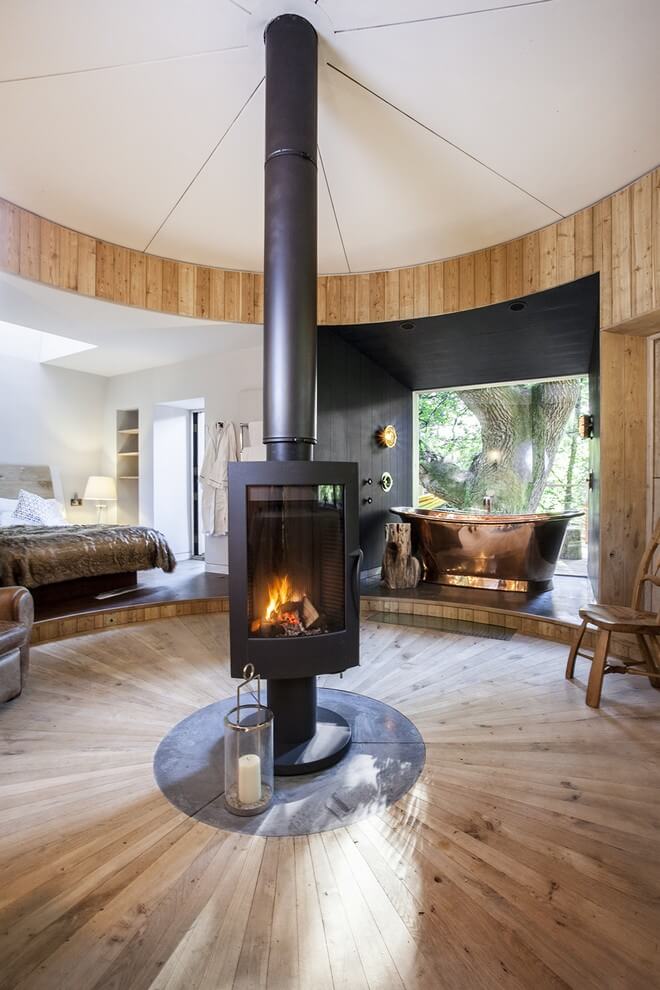 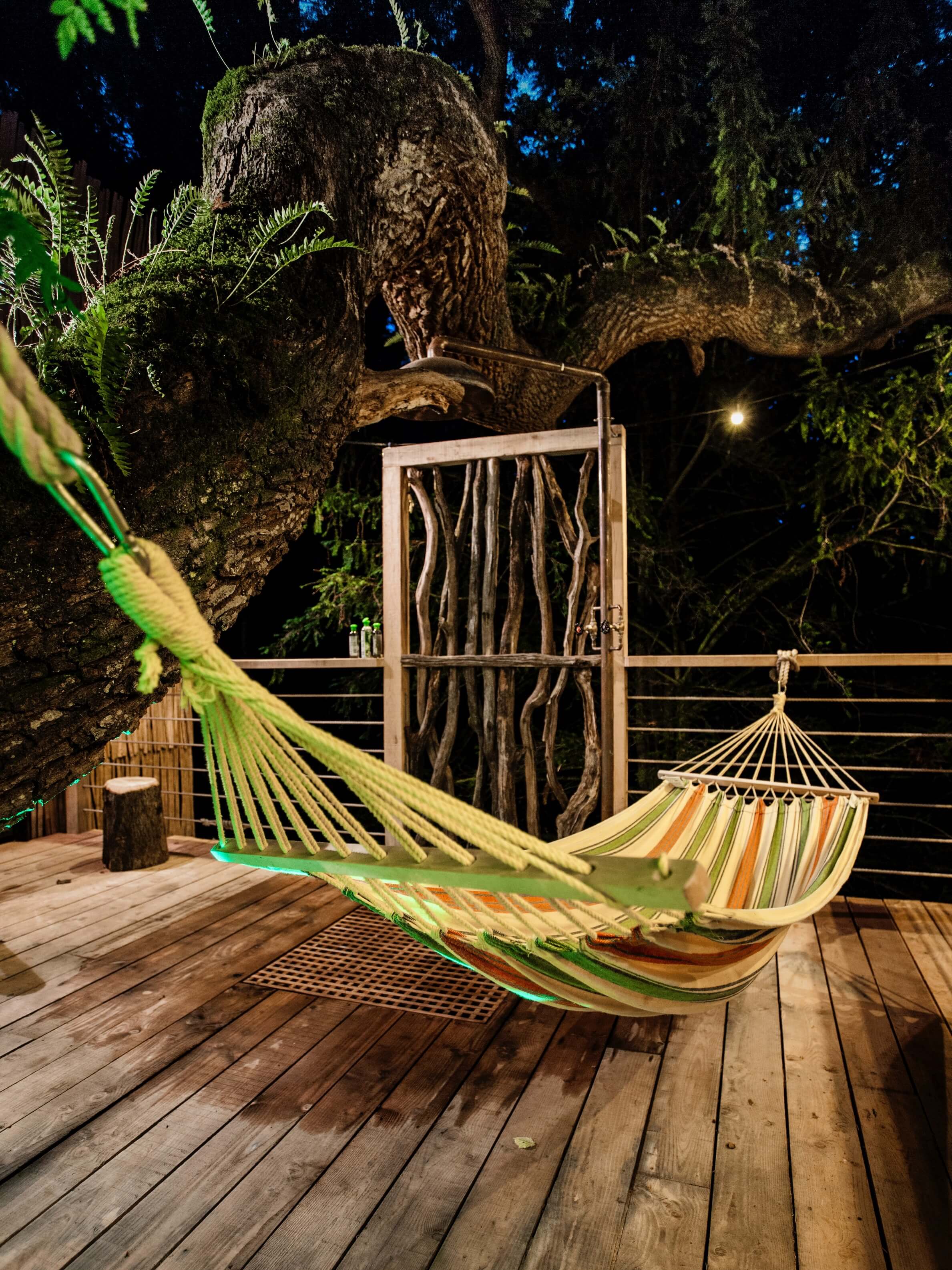 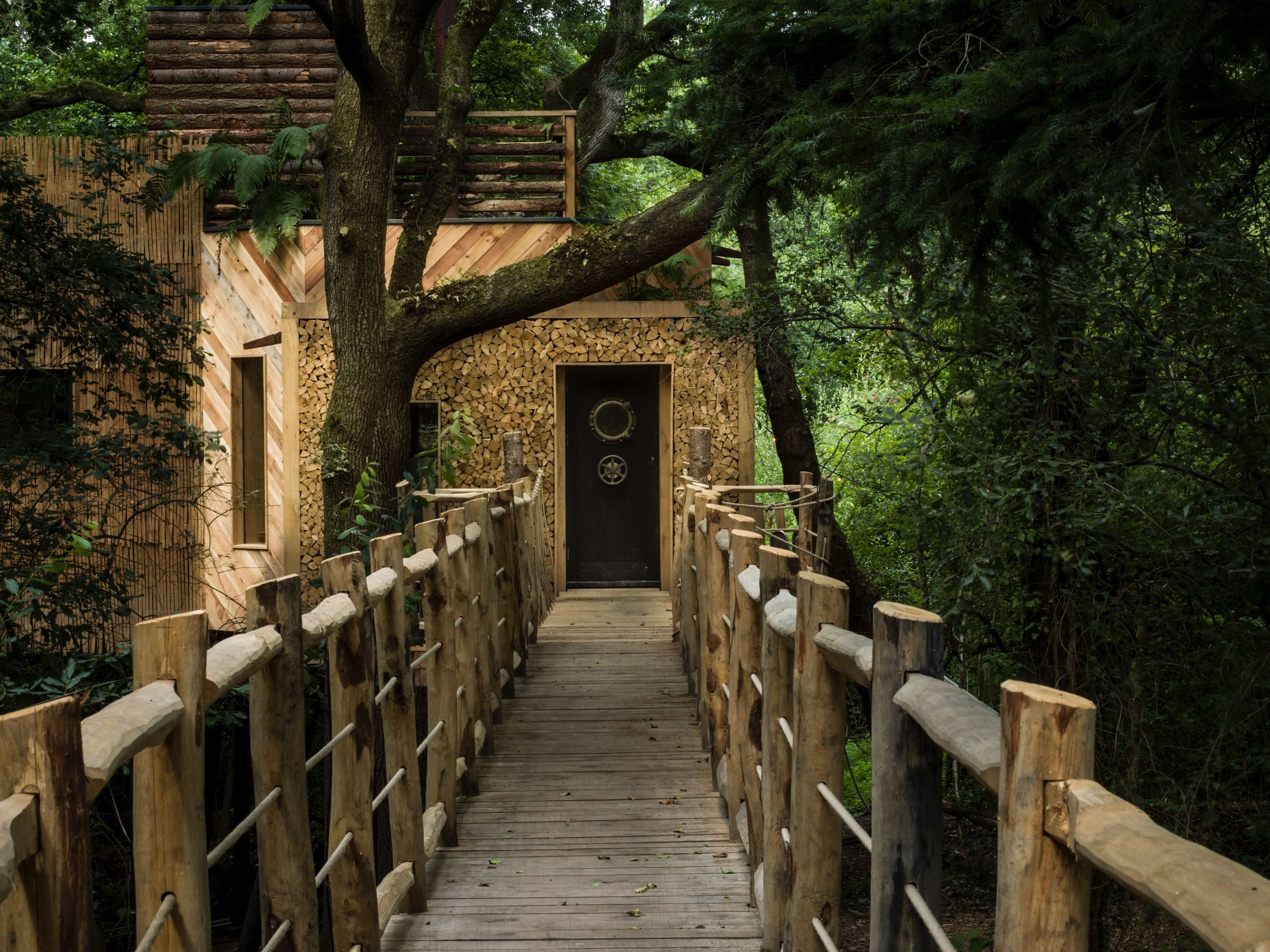 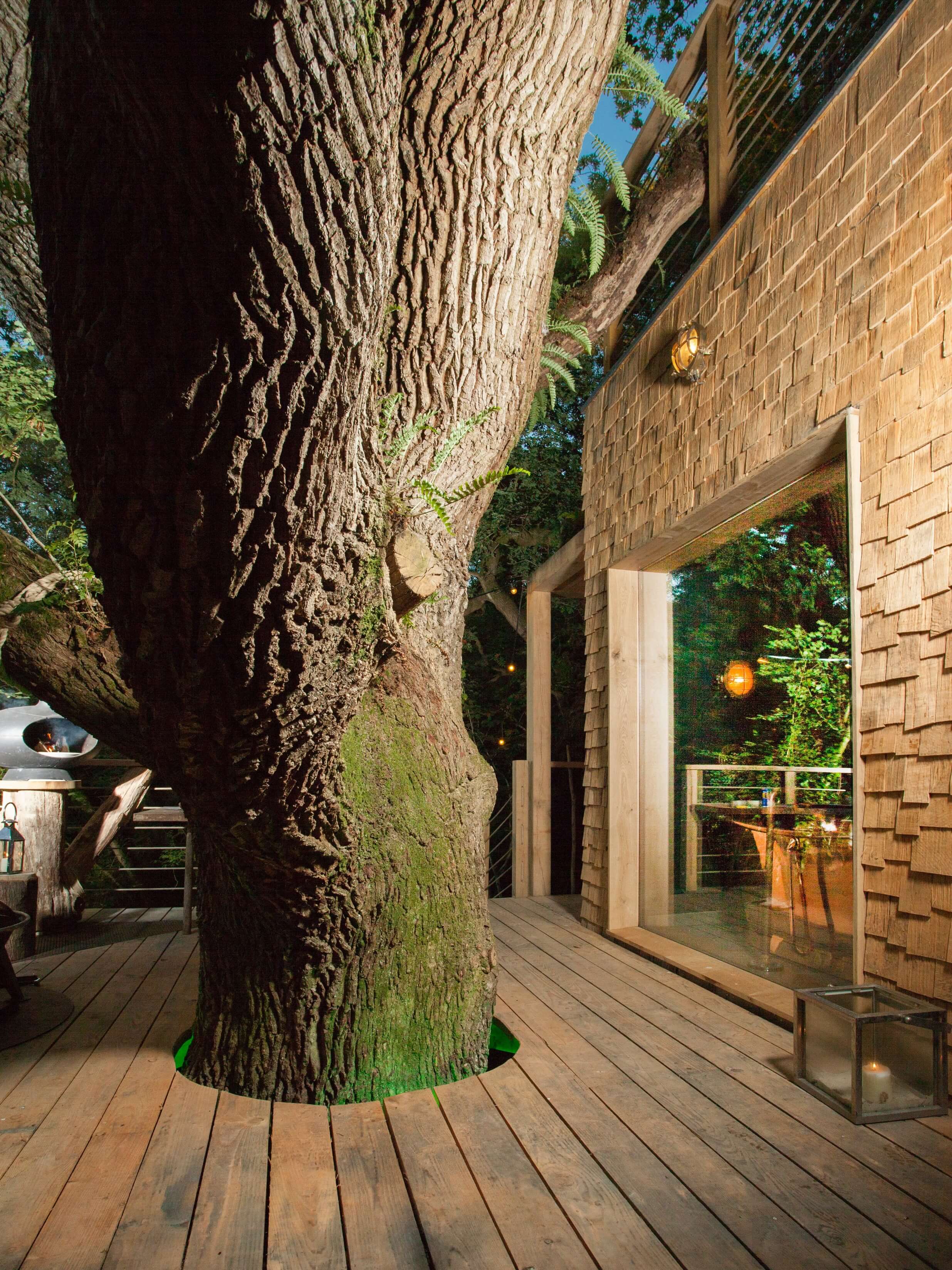 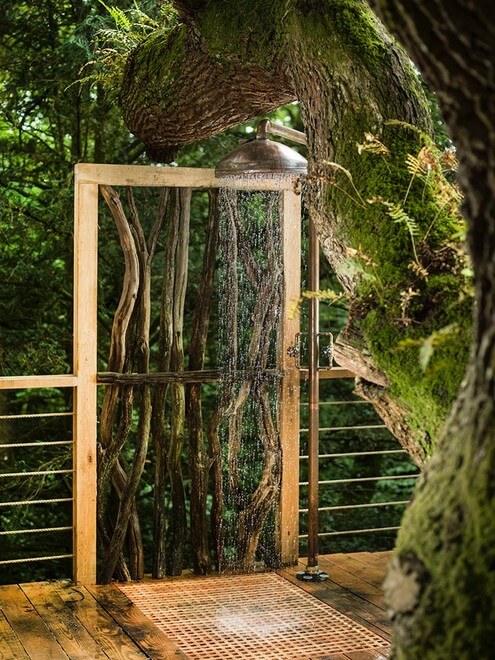